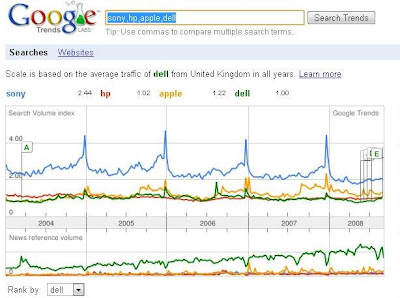 Let us jump right into the graph. What do you make out of it?
The graph has been taken by using the google.com/trends.
lets see.
Four different words has been compared with each other on the bases of how many times they were searched in the google.
Does these words(sony, hp, apple, dell) mean anything to you? Well its obvious that these are related with the four different big brand names. Well then, what can you infer from the graph? Straight away, you can say that the word sony has been searched more often then the the others, showing its relative popularity among the people. But watch out the result is related only to the United Kingdom region. May be in other region, its different.
But is that it? Is that the only thing we can infer from the graph. Well lets think over it. Can't it have any relation to the share market values? Does the two different types of trends have some relationships with each other. Is it possible to infer the trend in share values by looking at the trend in its popularity in google?
Well, may be yes. May be it is possible to do so. Or may be and just may be its even possible to predict the future values too.
Analytics is just the field that is trying to deals with these unquestionable questions.
Look, Observe, Transpose and Deduce. But the steps are not so simple as it looks. There are many different and complex mathematical theories that can play into the process of deduction. Hence it turns out that Analytics is just the other field on its way to becoming engineered.
Well next time, I will try to explore just what complexity may rise during the process of analysis. It a pure science of deduction. But when you get it just right then its what Sherlock Holmes would say, "Elementary , my dear Watson, elementary."