Any information, in a form of numbers, has to be first understood in terms of its physical nature.
For example, let say : 40 degree Celsius.  What does it mean? I mean is it cold or hot? You will be amazed that it is really difficult to categories temperature in terms of HOT or COLD, because we human beings are not so critical on there thought process, we are in a sense FUZZY about it.
But the computer program is not a human being. If a program was written to give you the answer to the above question than the program would either respond by saying its HOT or COLD, by the criteria written by the programmer.
Example:
If (temperature > 50 ) then
PRINT "HOT"
else
PRINT "COLD"
end.
Fair enough. These kinds of code are written every time to categories the variables or to make a Decision making System.  The above method has its own merits and demerits. Its a classical way of analysing  a data.
Now allow me to introduce you to the other way of analysing a data. It is not really a new method, but is gaining popularity in being implemented into different systems. It is called Fuzzy Logic. Do not be confused by the name. When you understand the method, you will find that its a simple statistical scoring method, or simple percentile concept. The process off course is known as FUZZIFICATION.
Lets apply it to the above example.
Now, instead of categorising the quantity as HOT or COLD. We start by defining a completely new set of attributes to the quantity. In this example I would prefer :
{COLD, COOL, WARM, HOT}
or
{Very COLD, COLD, Less COLD, Neutral, less HOT, HOT, Very HOT}
In this way, you can categories any way you like it, but be careful, your choice of categories is going affect the overall decision system, so BE CAREFUL.
So what do you do, now? Well, you start by scoring each category by checking the quantity. I am going to use the upper category as it is simpler.
Example:
So for 50 degree Celsius :
COLD     =  25%
COOL     =  30%
WARM   =  60%
HOT       =  30%
This scoring has to be done in a very precise way and not haphazardly. What these percentage mean is that 50 degree Celsius is more of a WARM than a COLD or HOT.  So instead of saying HOT or COLD, we have described the temperature in terms of four different attributes.
So for 100 degree Celsius :
COLD     =  0%
COOL     =  0%
WARM   =  25%
HOT       =  100%
Here, 100 degree Celsius is more HOT than COLD, so COLD and COOL is given a score of 0%.
The score can be a number between 0-1 or 0%-100%, as you like it. 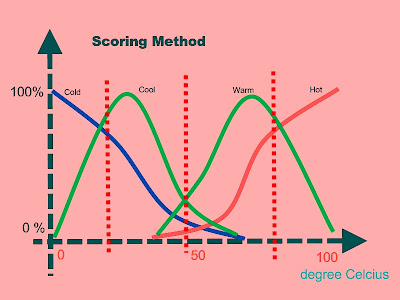 If you look into the above graph, you can see that you have 4 curves for each category.
Each curve has its own characteristics. Its known as Membership Function. I have used non-linear curve, but for simplicity even straight lines can be used. More abstract you make the curves, the more complicated is your calculation going to be.
So when you are scoring the variables, you just need to look over the X-axis and check the point and then move vertically upwards and start noting the values of each category. I have drawn three dotted red line to show you the example. lets start from the left wards.
The first line, which is less than 50, shows a high score for Cold and Cool but zero for other. The second line, which is around 50 has the score value for all the category but is very less. The last line, which is around 100, has a high score value for the Warm and Hot but not for other.
In this way, all the quantities can be scored into different values.
What is the advantage of going through such a long method? We have increased the number of variables to analyses the single variable. In this way, we can look at different attributes of the single variable and than make a decision, in this way our decision is going to be more valuable than before, and also more appropriate.
The whole process of generating categories and scoring the variable is called the FUZZIFICATION process. It is a Statistical Process, which can be realised in any computer program.
This is the first method in the whole process of making a decision system. Others are:
1.   Designing Rule-Based System
2.   Defuzzification Process
During the fuzzification process, we could have many types of membership functions, each having their own advantages over other.
But in a very simple words, it is the method of getting a good information on the variable, so that we get a clear picture of it.