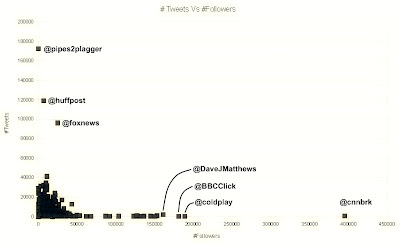 Well, this is going to be an interesting post. For some time, InRev team has been very popular in social media through www.buzzom.com. The concept of buzzom (Twitin) is to increase the user experience in social media and understand the market and behaviour of people. We have started with twitter, as it is the most popular social media.
With increasing number of users and the extending network, it is very difficult to understand how the network is growing and on what basis. To understand the user and the network of twitter, we have started analysing the available data, which has been retrieved by using twitter API.
Total record number retrieved = 2598
Some of the records were invalid and had to be rejected using simple filtering method.
Now let me explain the above graph.
X-axis = Number of followers
Y-axis = Number of tweets (Please click the graph to see a large image.)
The dense spot at the graph shows the place where a normal twitter user are located. These may be marketers, web designer, household business people, friend circle or may be someone who has just started using twitter. 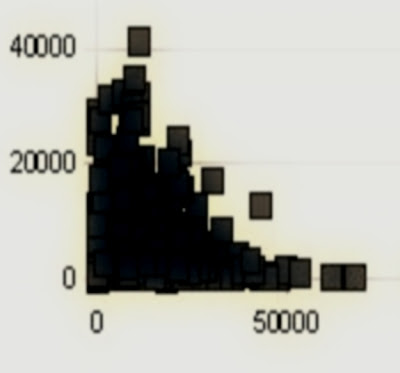 So you can normally see that the people with more followers tend to tweet less than the people with less number of followers. This is made more clear if you see the extremes of the axis.
People like @BBCCLick and @coldplay tend to tweet less though they have a very large followers. The other extremes are @huffpost and @foxnews who tend to tweet at the range of per hour and per minute basis. Why these contradiction?
People with large number of tweets and less number of followers usually means there is a group of small community who tend to use twitter as a means to talk to each other, thus they chat more often than others. But, in case of Fox news, its not a small community but rather seems to have followed the board cast system to send news. I can't say with certainty but, the number of followers are not so huge as that of BBC, may be due to the irritation by their flooding tweets.
On the other hand, people with many followers are mainly superstars and celebrities like @coldplay and @DaveJMathews, they tend to tweet less but have many listeners. Also, news channels like @cnnbrk and @BBCClick seems to have understood that flooding with too many tweets is not going to work.
This analysis forces me to think if there could be any twitter user which could lie on the right hand side of the graph, with highest tweet. Hmm, won't that be too irritating to all the followers. I would assume that given a time period, most people would always be under the hyperbolic curve, which seems very likely. Even if someone tries to be that position, he/she will surely be pulled back. It is natural tendency. Time series analysis might prove that. (Lets wait :))
Let me share a detail table, you can make out on your own:

So, how to conclude? Well, twitter is a very open society where people share their views, some come to listen, some come to talk, some to argue and some to just pass time. Its a virtual space where people exist . Many institutes have utilized this platform, by advertising or sending awareness program. Basically, its us - the people of this world.
May be a more in depth analysis is required, so that each individual can grow and benefit from this vast media which remains there. Its a huge market and I am eagerly waiting for a big possibilities.
My analyses are based on the small amount of data which could be bias. But, InRev is working hard enough to bring unbiased analyses and result. There will be more post on the way, from which everyone would benefit.
Some interesting post on social media: