One Cursor but Two Mouse 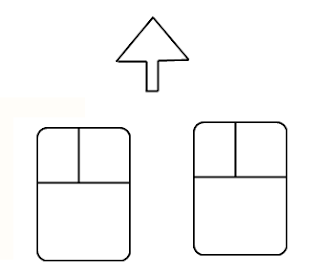 Have you ever tried to control your mouse from the mouse pad and the optical mouse at the same time.If you have, then you may know that it is quite close to impossible. The only way to achieve this is, if both the control is in the same direction. In that case its a redundant.
In similar ways, in the management process, if one person is working under different heads then it is impossible to make the person work, or get anything done from him.
This is the problem that is faced during improper project management, there are more then one person making decisions. The decision maker has to be one and only one, not more than that. Yes, we can have team to discuss the issue, but the final call has to be made from one person. In similar ways that happen in the court rooms.
The collaborative discussion may be important but the thinking and making any final decision has to be done by one key responsible person. This kind of management makes sure that the decision is taken with due responsibility. This may sound a trivial thing but it does exist everywhere in some way or other. Though we have only one heads in most organisation, the decision is not always taken by him but somehow indirectly by others.
The sense of responsibility grows when you find that you are the only one responsible for making any decision. When there is more then one, the responsibility factor gets divided and that causes inaccurate decisions or irresponsible behaviour. It is also a reason why a people are mostly destructive in a group, because the blame is on the group and not at the individuals.
Humans seems to be more aggressive while in a pack then in individual. May be its the instinctive behaviour of humans. So major points that I wanted to make was that in any management structure try to avoid two heads.